Approximately a million years ago, I published (yes, that verb was deliberately chosen) a post titled, Making the cut.. In the post, I discussed a my plan to separate the distillate into jars based on volume to really fine tune the end product. Now, 7 months, or one million years, later I have jarred the aged albeit still very young bourbon and I wanted to circle back to that discussion to let you all know how it went.

As I mentioned in my mashing post, the end product actually turned out very well. I mean, I’d be disappointed if I bought that bourbon in a store, but I consider it a victory for fledgling ‘shiners everywhere. My complaints with the batch have nothing to do with the quality…it just that it lacks the big bourbon flavor that comes with proper aging. We can talk a bit about what I did to age it later. I want to stick with a discussion on the cuts for the time being.

So, none of you will be surprised to note that I prepped the jars before the still began warming. For those of you who have operated a still already, you likely have your setup rituals. I can tell you that prepping jars will be a part of my regular ritual for the foreseeable future.

12 jars all given a number. The labels were kept big so that I could note specific conditions for each jar as they were filled. Now, in the interest of full disclosure, I did deviate from the plan a bit.

So here we are distilling away. At jar 7 we were just a little bit past half way. Lest you be concerned for my safety, I assure you that I am neither of the two gentlemen in the background. I was the one watching the still.

<parental soap box lecture> I do recommend caution if you distill into small jars. You can see that I actually ran the hose along the top of the clamp on the welding table. This was to minimize pooling in the tube. As the hose gets heavier it tends to move the smaller, empty jars around a bit. Keep an eye out to make sure you don’t (best case) lose your product or (worst case) blow yourself up when the alcohol vapors hit the heating element. </parental soap box lecture>

With the exception of dividing the run, the process was more or less exactly the same as it was last time. Here’s a close up for those who are interested:

Never mind the nasty rag. There’s nothing to see here.

It was all well and good to put the batch into smaller jars, but the real fun came with the mixing. Once the run was over, the alcohol coming out of the still started to acquire that telltale funk, we called it a day and proceeded to the mixing.

To mix, we simply lined up each jar on the bar. 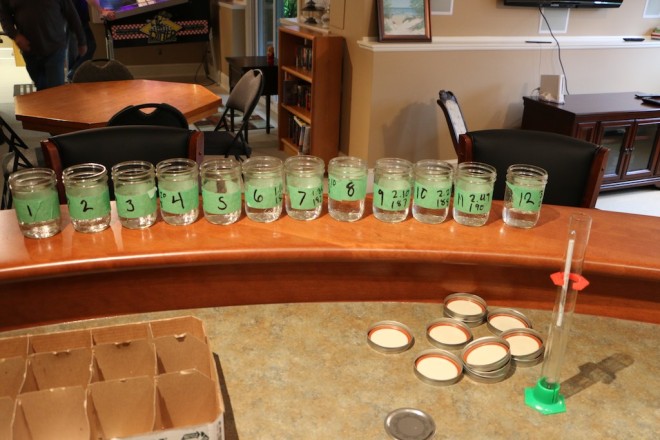 To be completely honest, I would have trashed Jar 3 as well if I wasn’t being stingy about the volume of booze produced. You can see the results of the spirit run in the large jar on the bar in the picture above. I looked at the contents of 4-8 and it looked so insignificant in the big jar. I thought to myself, how can this be the sum of all my hard work. Jar 3 didn’t smell that bad, after all. It didn’t have the nice, sweeter flavor of the heart, but it wasn’t gutrot either. I’ll reiterate that I’m happy with the product, but I do wonder what it’d have been like if I kept it smaller.

I was also really impressed with the charred oak chips. I haven’t yet filtered it, but the oak did good stuff to the flavor.

And we come to the end of our tale. I consolidated the waste alcohol and kept it around as part of my no distillate left behind policy. I won’t drink it because, well, I choose life…but I will absolutely light it on fire when I get a chance.