I can only assume that many of you have been sleepless for the last several nights. After all, it’s been almost a week since my cliffhanger post. You were all tossing, and turning and calling out for the yeast to “Ferment, damn you!” through consecutive restless nights. Please rest assured that my time this weekend was indeed a success, and it was a success on a variety of levels.

The first success came in the form of me actually <gasp> thinking about it a bit. To frame the scene, it was very much like last weekend. I open the fermenter which, by all accounts, should have been near flammable by now (yes, that’s hyperbole, leave me alone). I gingerly dipped my new, graduated cylinder into the wash. I placed the bobber in the cylinder to be met with…exactly the same results. That’s right. The bobber read 0 proof. The NERVE. I’ll be honest and say that I almost pitched it. We were in the middle of a torrential downpour (yes, in Canada, in January). I thought that I might enjoy doing other things rather than waiting for ethanol to come crawling out of a tube all afternoon. However, I just couldn’t imagine quitting on it.

I resolved to dig deeper. I went, got a jar, and drank. I won’t say I drank a lot of it, but I drank some of it. As Forrest Gump might say, “I’m not a smart man, but I do know what booze tastes like.” There was booze in that jar. There was a lot of booze in that jar …at least compared to the successful whiskey and the trainwreck vodka that were my last 2 runs. I thought more about the measurement and realized that, unlike the whiskey and vodka where you strain out the “mash” the wash would always have the increased density because of the high sugar content (which taste told me had decreased significantly in the past 2 weeks). How could a bobber that functions on density possibly be relied upon in such circumstances? I decided that there was ethanol in the wash, dammit, and that I was going to pull it out. I’m really glad that I did.

There’s a shot of the wash in the bottom of the fermenter (post siphon) you can see that the nearly black color that the wash had been has faded into a murky sort of brown. The smell was certainly yeasty, but it wasn’t nearly as strong as it was the previous weekend.

We’re going to skip ahead through some of the boring parts (e.g. me prepping the still, getting the burner ready, locating jars, etc.). I decided that I was just going to do the first distillation, the stripping run. That the spirit run could wait for a while. I thought that perhaps I’d toss the foreshots/heads out up front rather than distilling them twice, so I got a little jar (for the heads/foreshots) and a big jar for the hearts/tails.

There she is, all ready to go. You’ll note the painting project in the background. Remember that it’s always advisable to distill with a partner (even if that partner is doing something else). You can’t go wrong with getting help when and if you need it. Also, I’ll give a shout out to Mad Mads, my mad scientist buddy. He provided the new and improved cylinder to replace the broken (cheap) ones I’d been using. I also recommend having a mad scientist friend. It makes a lot of things more interesting.

I’ll condense the rest of the run down for the sake of brevity:

(proof tested in case you didn’t believe me).

5. I will not, at least as of now, be doing a spirit run. Given the quantity produced, and the quality of that quantity, I see little point in a second distillation. I captured the nasty stuff in a jar up front, and I shut down the still once it was getting difficult to maintain a temperature of under 185. I could have pushed for greater volume, but it was tasting good and sweet…I decided to leave well enough alone. 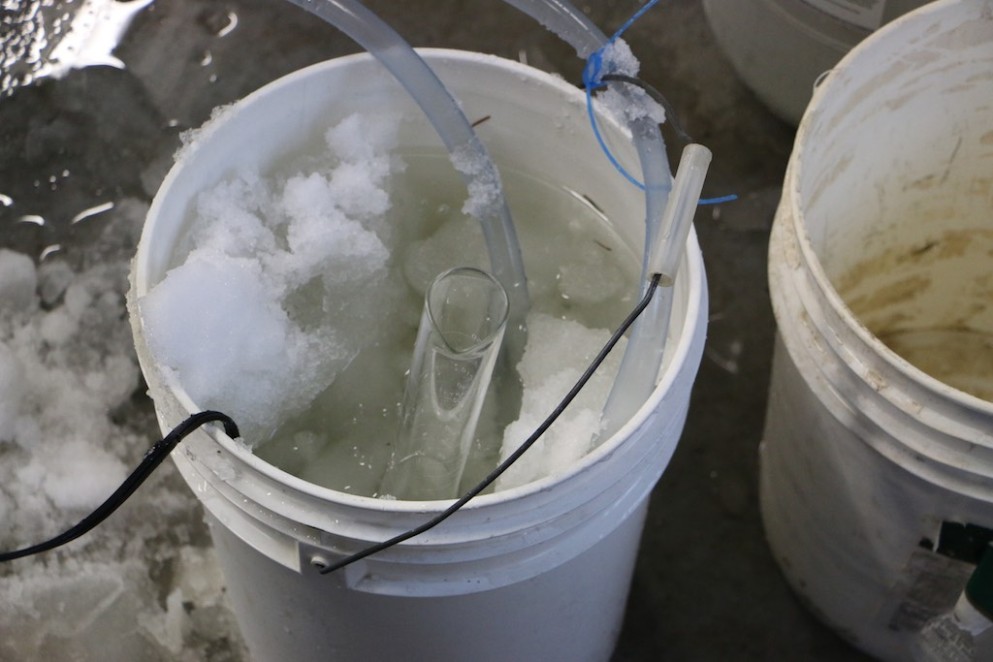 Remember it’s important to chill your samples out of the still. What are we? Heathens?

So, to make a long story short, recipe 3 was a pretty significant success. It was, hands down, the best run I’ve had. Part of that is experience, but I like to think that part of it was the wash and the recipe. The higher concentration of ethanol made a lot of things easier. I can’t say for certain if the extra week helped, but I think I’ll let most of the washes/mashes I do from now on go for about 2 weeks. The taste was certainly less sweet after two weeks. The yield was also higher than the original recipe that I linked on the Links page.

The first 1.6 liters and an empty can of delicious and refreshing Barking Squirrel.